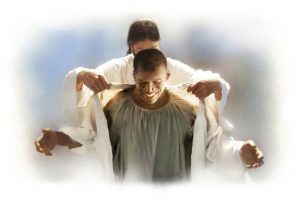 Bartimaeus made a living by begging. He was blind. There was no Social Security, no insurance, no group homes for the blind. His only recourse was to beg.

But one day he heard Jesus was coming by. He cried out for Jesus despite being rebuked. His persistency got Jesus’ attention and Jesus called for him.

The word cloak can also be interpreted mantle. According to some commentaries, this cloak would assist Bartimaeus in begging. It was most likely the only possession he had. Yet when Jesus called, he discarded his only valuable, and went into the presence of God.

Earlier in this chapter, Jesus encountered a rich man who also sought an audience with Jesus. He wanted to inherit eternal life. But when Jesus encouraged him to discard his “mantle” of rich, he found the price too high and walked away unchanged.

Two men. Both sought an audience went Jesus. Both recognized He was King.
One could see but didn’t see his real need. The other couldn’t see but saw his need.
One was rich in money but poor in spirit. One was poor in money but rich with faith.
One came seeking justification. One came with expectation.
One held on tightly to his mantle of rich. The other quickly discarded his mantle of impoverished. Only one was forever transformed.

What mantle are you clinging to? (I’m asking for a friend, the Holy Spirit.)

Are you clinging to your mantle of “victim”, “divorcée “, “sexually abused”, “mistreated”, “discriminated against”, “poor“, “sick”, “worldly riches”, “successful business man” What defines you?

Jesus is inviting you into His presence today. Remove your cloak. Come before Him unencumbered with your past junk. Like Bartimaeus, come with expectation and He will give you a new cloak, a better mantle, a cloak that defines who He called you to be.

“Jesus stopped and said, “Call him.” So they called to the blind man, “Cheer up! On your feet! He’s calling you.” Throwing his cloak aside, he jumped to his feet and came to Jesus.” Mark‬ ‭10:49-50‬ ‭NIV‬‬