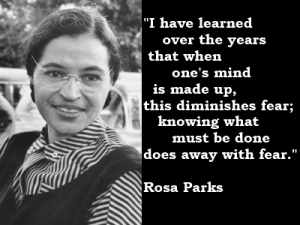 One year, Wake County Schools decided to have a weather makeup day on Good Friday. One of my students was indignant about the situation and said, “I’m not coming because I have to go to church!”

“Are you Catholic?” I asked. “Because most Protestant churches have Friday night services.”

“No, I just don’t think it’s right for them to have school on Good Friday,” he replied.

“Then don’t lie about it,” I encouraged him. “Own it. Stand up and declare what you believe. But if you take a stand for something, you must be willing to accept the consequences of your conviction.”

We live in a world where everyone has a cause. Everyone has an opinion and want their opinion heard and accepted with no penalty. Everyone is protesting something. But no one wants to accept the consequences that may result from their protest or opinion.

The disciples preached Jesus. They healed people in the name of Jesus. But this message was not popular. It was banned. They were threaten, beaten, jailed. But they willingly faced the consequences of their actions. Their cause was greater than the trials. Their commission was more powerful than their obstacles.

I’m asking myself that question in a very real way this morning. My book is in jeopardy of being published because of what some may say is my radical belief in grace. Do I tone down my beliefs? Do I make it more palatable for traditional Christianity? Do I inject statements to “temper” or “balance” this grace message I have embraced? My reply is the same as the disciples:

“But Peter and John replied, “Do you think God wants us to obey you rather than him? We cannot stop telling about everything we have seen and heard.”” Acts of the Apostles‬ ‭4:19-20‬ ‭NLT‬

And so I’m willing to accept this consequence. I am willing to walk away, knowing God will work all things together for my good!

Are you willing to take a stand?