Lazarus had been dead for four days. The funeral was in progress. He was buried. For Martha, his sister, all hope was gone. There was no recovery. But when Jesus finally showed up, He asked Martha, “Do you believe?” (John 11:26)

His son suffered greatly with a demonic spirit. He was desperate. The disciples were his last hope. But alas, they could not cast out the demon. But when Jesus arrived, He said, “All things are possible to those who believe.” (Mark 9:23).

Two desperate situations. Two hopeless people. Two circumstances that lingered for far too long. One solution: A belief that Jesus is who He says He is. 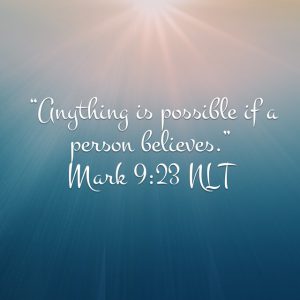 God has been speaking to me about complacency. Sometimes when a sickness lingers, a child has been away from the faith a long time, finances are tight for years, a marriage grows distant, we can become hopeless. We learn to accept, ignore, deal with it. But then Jesus arrives and asks us, “What do you believe?”

Believe today. And if you can’t believe, declare and pray: Lord I believe. Help my unbelief.

“Jesus said to him, “If you can believe, all things are possible to him who believes.””
‭‭Mark‬ ‭9:23‬ ‭NKJV‬‬