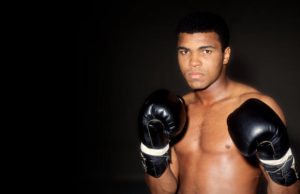 Muhammad Ali, one of the greatest boxers of my generation, did most of his fighting outside the ring. Long before he met his opponent, he would taunt them – declare he was the greatest and in undefeatable. He got in his opponents head.

Goliath was the king of taunts. He defeated Isarael’s army with fear before they ever engaged in battle. Listen at his words:

“Why are you all coming out to fight?” he called. “I am the Philistine champion, but you are only the servants of Saul.” 1 Samuel‬ ‭17:8‬ ‭NLT‬

Do you see Goliath’s lie? He told Israel’s army they were servants of Saul. They believed him. Saul was scared and so was his army.

But along comes David. He refuses the narrative he is fighting as a servant of Saul. Notice how many times David declares for whom he is fighting.

“You come to me with sword, spear, and javelin, but I come to you in the name of the Lord of Heaven’s Armies—the God of the armies of Israel, whom you have defied. Today the Lord will conquer you, and I will kill you and cut off your head. And then I will give the dead bodies of your men to the birds and wild animals, and the whole world will know that there is a God in Israel! And everyone assembled here will know that the Lord rescues his people, but not with sword and spear. This is the Lord’s battle, and he will give you to us!” ‭‭1 Samuel‬ ‭17:45-47‬ ‭NLT‬‬

As I read FB post, I wonder who Christians are fighting as. I am bothered by the narrative that a particular political party is America’s Savior. One meme actually stated that the only thing preventing the destruction of America was the current president.

Let me ask you a question: Is your hope for tomorrow in an election or in a resurrection? Elections come and go. Jesus’ resurrection is eternal.

Do your post point people more to a political party or to the person of Jesus Christ?

I want to be like David. I want to face the giants in my life not as a servant of a political party, or a particular denomination, or as a female, or as an American but as a servant of the Most High God! My hope is in Him and in Him alone. I refuse to quake and be taunted by the Giant of Covid or socialism. I refuse the narrative that any human can save me. I don’t come in the name of Trump or Biden. I come in the name of the Lord of Heaven’s Armies. I want everyone to know there is a God in America and His name is I Am!