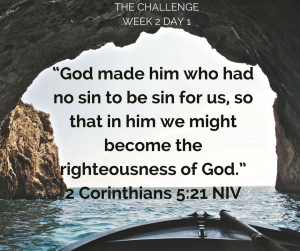 David was at his lowest. He had lost everything – his family, his possessions, the respect of his men. The voice of accusation was screaming at him, loudly. (I Samuel 30)

Internally, I am sure David wrestled with knowing his actions were partly responsible for the predicament he now faced. David had outwardly aligned himself with the Philistines while secretly raiding their outer posts. I’m sure the enemy used this discretion to gain a foothold into David’s thoughts. The enemy was quick to inwardly shout, “You are not fit to lead. You are just a shepherd boy. Look at what you have done. You have caused your men to lose everything they hold dear and it’s all your fault. Saul was right to try to kill you. He knew your arrogance would lead to destruction. Samuel must have been drunk when he anointed you king.” The voice of the enemy lurks, looking for areas of weakness to accuse and disqualify us.

But there were also external voices accusing David. His men, the very men he had done life with for the last couple of years, the men he had fought battles with, the men he had accepted when the world had rejected them, the men he had broken bread with, joked with, cried with, now accused him. “Why did you bring us here? We told you it was not wise to be a double agent. You should have killed Saul when you had the opportunity. This is all your fault. Fix this now or we will stone you.”

David stood alone. In the midst of the chaos – the internal and external accusations screaming at him, David finds clarity by quieting himself. David drew strength from the Lord his God. (I Samuel 30:6b)

I imagine David reminded himself of God’s promises for him. I wonder if he replayed Samuel’s visit that faithful day when he anointed him king. But then David did something we should all do when the enemy accuses us. He reminded himself he was righteous in God’s eyes. David asked for the ephod to be brought to him (I Samuel 30:7). The ephod was a priestly garment set apart for those who were holy. During intense accusations, David reminded himself that he was holy. This mistake could not, would not stop God from fulfilling his promises towards him. David, a man who had made a grave mistake, reminds himself that he is righteous and then boldly enters God’s throne room of grace and inquires what he should do next. David did not wallow in his failure. He did not beat himself up. He simply went to the Father and found grace.

This is a lesson for each of us. We may have made some mistakes and the enemy is quick to remind us of our shortcomings. But like David, we clothe ourselves in righteousness, remind ourselves of the promises God has spoken to us and we boldly enter into His throne room where we find grace. We silence the voices of accusation with truth and we declare:

“I am the righteousness of God in Christ Jesus. (II Corinthians 5:21) I am holy in his sight, without blemish, and free from accusation (Colossians 1:22).”

Daily prayer for Week 2:
Dear Father, I thank you that I have been baptized in Christ and into His death. Therefore I walk in newness of life. I have been united with Him in the likeness of His death and the likeness of His resurrection. I know my old-self was crucified with Him and I am no longer a slave of sin for I have been freed from sin. I am alive in Christ and as such, sin will not reign in my body and it has no dominion over me. I have been liberated from sin and I am now a child of God. I bear fruits of righteousness and have eternal life in God.
(Based on Romans 6)

Memorize it – meditate on the scripture, quietly repeating it over and over again throughout your day until you can declare it without reading it.

Actualize it – make the scripture real to you. Ask the Holy Spirit to give you a fresh revelation of its meaning; how can you apply this to your daily life? Then journal what you feel the Holy Spirit is speaking.

Personalize it – Rewrite the scripture using personal pronouns such as “me” or “I”. For instance: “I am the righteousness of God in Christ Jesus” Remind yourself that the scripture applies to you personally.

Week 2 Memory Verses
Focus: I Am The Righteousness of God
(Unless otherwise noted, all scripture are NIV)

DAY 1 MEMORIZE: “God made him who had no sin to be sin for us, so that in Him we might become the righteousness of God”. (II Corinthians 5:21)

DAY 2 MEMORIZE: “For if, by the trespass of the one man, death reigned through that one man, how much more will those who receive God’s abundant provision of grace and of the gift of righteousness reign in life through the one man, Jesus Christ! (Romans 5:17)

DAY 3 MEMORIZE: “For the grace of God has appeared that offers salvation to all people. It teaches us to say “No” to ungodliness and worldly passions, and to live self-controlled, upright and godly lives in this present age.” (Titus 2:11-12)

DAY 4 MEMORIZE: “He himself bore our sins” in his body on the cross, so that we might die to sins and live for righteousness; “by his wounds you have been healed.” (I Peter 2:24)

DAY 5 MEMORIZE: “For all have sinned and fall short of the glory of God, and all are justified freely by his grace through the redemption that came by Christ Jesus. God presented Christ as a sacrifice of atonement, through the shedding of his blood—to be received by faith.” (Romans 3:23-25a)

Daily Declaration:
God made Jesus who knew no sin to be sin on my behalf, so that I could become the righteousness of God in Christ Jesus. (II Corinthians 5:2)